A recent customer was getting ready to list their home for sale and found that one of their little boys had dropped some bath toys into the toilet to see how they would hold up during a flush. As you might imagine, the toys did fine but the toilet overflowed onto the ceramic tile floors. The homeowner knew the toilet valve was bad but hadn’t replaced it yet, so unfortunately it overflowed for a while until they noticed the water in the ceiling of the family room below. Luckily, it was a fairly slow leak and didn’t spread over a very large area. 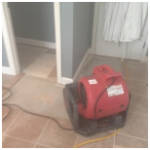 The couple cleaned up all the standing water before we arrived but did some research online and saw all the potential problems water can cause if left unattended. They called their insurance agent and explained that they really didn’t want to file a claim with the move coming up so the agent suggested they reach out to us. We’ve had a lot of luck working with homeowners as well as insurance agents and adjusters to keep costs down and minimize inconvenience. 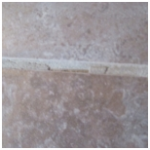 We started by checking the ceiling of the family room and found that the water had evaporated and all that was left was the little bit of staining in the ceiling. The couple already had plans to have the house painted in preparation for selling so I suggested we leave the ceiling alone and let their painter seal those areas before painting.

Next we took moisture readings in the bathroom where the water loss occurred and found that it really had only affected about 15% of the tile in the bathroom and about 12” of carpet just outside the bathroom. In this case we knew the tile was still available so rather than pulling up all the tile and cement board for the floor, we simply cut out the area that was damaged by the water. The only concern we had was in matching the grout. The color on the package swatch is usually not exactly the same as what is in the bag once dried and if you’ve got a couple that are close it can be difficult to get the right one for an exact match. 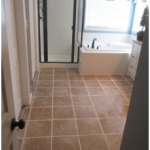 The grout in the floor was cracked in some other areas as well so they suggested we simply re-grout the whole floor to ensure everything looked uniform. By the time we wrapped up, it looked like a brand new bathroom and all for less than their deductible. They were so thrilled that they asked us to do some additional clean-up in the shower and tub surround where the wall tile grout had cracked and the caulk was beginning to fail. They knew the master bathroom would be a key selling feature for their home and wanted it to be perfect so trusted us with the job.

Posted By Service Team of Professionals
Categories:
More Posts Like This